Congratulations to the varsity volleyball team for winning the 35th Annual Golden Spike Invitational on Saturday! Leading the offense were senior Taylor Baldwin with 31 kills followed by senior Morgan Green with 30 kills. Senior Ashley Semler led the defense with 27 digs followed by Baldwin with 20 digs.

The offense was paced by junior Taylor Bombick and sophomore Maddie Darrah with 28 and 30 assists respectively. Both Baldwin and Green were named to the All-Tournament team with Baldwin being name the tournament MVP.  Congratulations ladies! 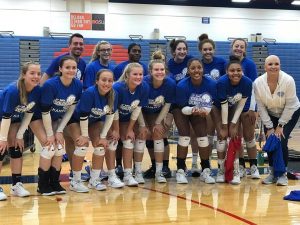